After experiencing the worst quarterly performance since the financial crisis to end 2018, the S&P 500 has rebounded sharply posting positive returns in 5 of the first 6 months of the year and returning over 20% through the end of July.  Returns were bolstered by better than expected earnings and GDP growth in Q1, and also by the Federal Reserve’s pivot to end their rate hiking cycle in December and just recently opting to cut rates by 0.25%.

The Fed’s quick change in stance came as a surprise to economists, many of whom were projecting 2-3 additional rate hikes in 2019.  Their decision is definitely curious when you look at the data around two of the Fed’s primary mandates: controlling inflation and promoting maximum employment. Inflation has been at or below the Fed’s stated target of 2%, and unemployment has dropped to a 50-year low of 3.7%.  Additionally, there have been other positive signs in the economy including strong corporate earnings (77% of S&P 500 companies that have reported Q2 earnings through the end of July had a positive EPS surprise according to Factset) and consumer spending rose at an annual rate of 4.3% in the 2nd quarter, or the highest since 2017.

So why did the Fed decide to cut rates despite all this positive economic data?  One rationale is that it was a proactive measure to lessen the risk of a recession in the US given the economic slowdown that has affected other developed nations around world.  While market performance and current economic data has been positive, the Fed’s actions are based on their forecasts and future projections on the direction of the economy.  Based on their comments those forecasts have been showing some potential headwinds for the US economy including the slowing growth abroad in areas like China and Europe.  Another reason for the rate cut is that many Fed members place particular importance on the term structure of the treasury yield curve, and believe that maintaining an upward sloping curve is critical for ensuring economic stability.  As you can see in the chart below, the 3-, 5-, and 7-year treasury yields were below both the 3-month and 1-year yields as of June 30, 2019. 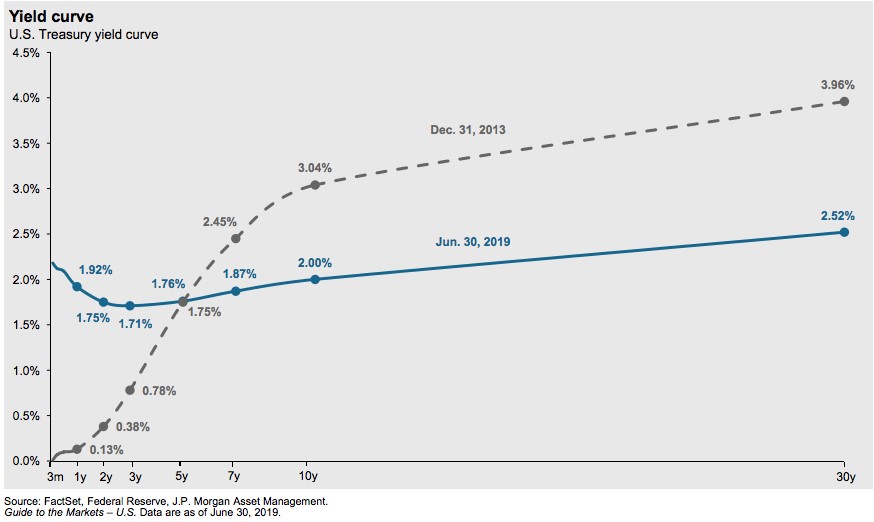 While portions of the yield curve have inverted, the measure that many economists watch closest and tout as a recession indicator, the spread between the 10- & 2-year treasury yields, has yet to invert.  It’s a focus because that particular spread has inverted prior to the last four economic recessions.  If you’re a believer in that measure as a leading indicator for recessions, then there is good reason to believe there is a low risk of a recession in the US over the next 12 months.  The chart below demonstrates the timing from when those yields have inverted and the US enters a recession, which on average has been 14 months.  As of writing this, that spread has narrowed to +0.11% and the 10-year treasury is at its lowest level since 2016, so it will be something to watch.

While there certainly are risks facing the global economy that could have a negative impact on US equities, there are also cases to be made for further upside.  It’s true that this has been one of the longest expansions in history, the S&P 500 has more than tripled since the financial crisis, and equity valuations are slightly higher than their historical averages (fwd PE was 16.74x at 6/30/2019 vs the 25-yr average of 16.19x).  But environments like the one we are in currently with low inflation, low interest rates, and low treasury yields support even higher valuations and make equities more attractive.  It’s important to remember that the overall economy and markets are linked, but it’s the market participants which drive asset prices.  For those investors charged with the decision on where to allocate capital for themselves and their clients, traditional alternatives to equities look much worse than they have in other periods.  For example, the 10-year treasury yield is now well below 2%, and prior to the financial crisis that yield was over 4%.  The same can be said for corporate bond yields as well with the BC Aggregate Bond index only yielding around 2.4%.

It will be important to watch the various risks that are present: slowing GDP and earnings growth, continued trade tensions with China, political instability in the US and abroad, and a slowdown in aggregate demand globally.  Thus, amongst these risks and uncertainty, it’s more important than ever to remain diversified and be prepared for the range of possible scenarios that may play out in both markets and the global economy.

The posts expressed are views of FSTC and are not intended as advice or recommendations. For informational purposes only.

When to Consider Decanting a Trust to a Special Needs Trust

Estate Planning in the Time of COVID

©2022 First State Trust Company. All Rights Reserved.
Back To Top