2019 was certainly a year where everything seemed to work.  Almost all major asset classes were up double digits with US Equities leading the way returning over 30% for the year, the first time that’s happened in a calendar year since 2013. 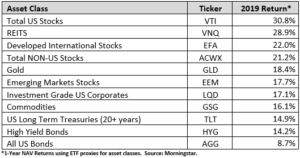 Two portions of the US Equity Market that contributed to such great performance in 2019 were homebuilders (+49%, ticker: ITB) and the technology sector (+47%, ticker: IYW).  Technology was driven by the strong individual performance of some of the largest companies that comprise that sector like Apple (+86%), Microsoft (+58%), and Facebook (+57%).  While homebuilders benefited greatly from the average 30-year fixed mortgage rate falling from 4.5% to begin the year to a historically low 3.75% at the close of 2019, its lowest level since 2016.

Both of those segments, and the US market as a whole, were supported by the main driver of the economy: US Consumers.  Consumer spending, which accounts for approximately two-thirds of US GDP, was strong throughout 2019 as consumers benefitted from federal tax stimulus and an extremely competitive job market leading to increased wage growth, particularly for lower and middle-income workers.  The strong job market was another factor that helped homebuilders and the US housing market in 2019. (links: ‘Faster Wage Growth for the Lowest-Paid Workers’ & ‘US Consumption, Incomes Pick Up in Sign of Holiday Cheer’ )

Perhaps the biggest surprise of 2019 was the strong performance in fixed income as the Fed shifted their positioning from tightening to begin cutting rates, and yields fell globally across all fixed income sectors.  Contrary to strategists’ forecasts entering 2019, the 10-year treasury yield fell from 2.7% to begin the year to below 1.5% this summer or not far from its all-time low of 1.3% that was established in 2016.   Additionally, the spread between the 2- & 10-year Treasury yields inverted briefly this summer (a common recession indicator) before growing to its widest margin since October 2018 to end the year with the 2-year closing at 1.6% and the 10-year at 1.9%.  This steepening of the yield curve is one of the reasons many economists believe a recession in 2020 is unlikely.

After seeing such positive performance across the board in 2019, it’s important to look at the environment we’re in today compared to the end of 2018 when investors were fearful, and US Equities experienced a 20% correction.  At the end of 2018, the Federal Reserve was threatening tighter policy, global GDPs & manufacturing numbers were contracting sharply, the trade war with China was escalating, and the yield curve was flattening.  Contrast that with the end of 2019, where we have an accommodative Fed Policy, improving global growth figures, trade wars that have stabilized, and a steepening yield curve implying stronger growth expectations.  So while investors may want to be cautious after a 30% run-up, markets trading at all-time highs, and valuations above their historical averages, there is still reason for optimism as we look forward to 2020.

The posts expressed are views of FSTC and are not intended as advice or recommendations. For informational purposes only.

©2022 First State Trust Company. All Rights Reserved.
Back To Top